Book Review: The She Code, by Chris Marie Green


I received a copy of this via a Goodreads giveaway.

I was intrigued by the premise because, let’s face it, nerd girls are not often used as heroines in their own right. The heroine in question is Mandy Halsey, who works as a receptionist at Gaslight Comics and aspires to become an artist there. She also lives her life by a girl code, which her best friend and roommate, Sheila, is dangerously close to breaking. Mandy’s not exactly forward when it comes to men, but Sheila, who should know Mandy’s cues after being friends for so long, keeps making moves on her crushes. While dealing with the terrible but common problem of a friendship falling apart, Mandy also has to tackle the reappearance of her father in her life, her crush on the cute but unavailable neighbor guy, the attentions of her mysterious boss, and the general awfulness that is growing up.

There’s a lot going on in this book, so much so that for a long time, I wasn’t quite clear on what the primary story was and which were the subplots. That uncertainty was part of what kept me reading. I could have done without the fake-out regarding Mandy’s ex-boyfriend toward the end, but other than that, the storylines came together well. The meandering pace contributed to Mandy’s struggle to figure it all out. I’m sure not every twenty-something’s life is spiraling out of control, but I found it relatable.

However, the multiple storylines crowd the story so much that Green doesn’t have room to flesh some of them out. I loved Didi, Mandy’s new friend at Gaslight, but we barely saw her. For a story that focused so much on friendship, I would have loved to see Didi be a bigger part of it. In a similar vein, the conclusion to the boss taking interest in Mandy’s work seemed to be there just to wrap it up.

Overall, I liked the message that no matter how much you want to hold on to something, sometimes it’s better, though not easier, to let it go. You can’t grow if you’re held down, and that’s something many of us ‘new adults’ need to learn. I also appreciated that Mandy is allowed to be geeky without apologizing for it. The book featured comics by Billy Martinez of Neko Press Comics, which were a neat way to show Mandy’s professional and personal progress. The She Code was a fun, light read, perfect for summer reading in the sunshine.
Posted by C.G. at 10:51 PM No comments:

Mostly Martha is the story of Martha Klein, a successful but headstrong chef who has to take in her eight-year-old niece, Lina, after the unexpected death of Martha’s sister. There’s little room in Martha’s busy lifestyle—and her one-bedroom apartment—for a grieving girl, and she struggles with becoming a parental figure. Enter Mario, who’s hired to keep the kitchen running smoothly. But he’s always late and plays Italian opera while cooking, and Martha’s convinced he wants her job. Of course, Mario’s a good guy who only wants to work with Martha because he admires her, and this is hammered home when he helps get Lina to start eating again after Martha starts bringing her to work.

It’s a lovely little story that manages to lock in on the sadness of the situation as well as the way adversity can actually change someone’s life for the better. As wonderful as the story as a whole was, Martina Gedeck as Martha was easily the best thing about the movie. I was in a terrible class in college where we had to watch Death in Venice, a movie from the ‘70s based on the Thomas Mann novella. It’s a little over two hours long, but I think it contains around forty minutes of dialogue. The rest is filled with music. I actually hated it (I might enjoy it outside of that class, though. Who knows?), but I bring it up because I think a lot of what made Mostly Martha shine was the silences. The dialogue never really rises above average (but that could totally be a translation thing. German is so hard!), but although Mostly Martha relies less on music than Death in Venice, the moments of silence are key to buying into Martha’s growth. From her reactions, it’s easy to see the subtle changes as she goes from self-sufficient career woman to a woman open enough to let a child into her heart.

It was remade in 2007 as No Reservations, starring Catherine Zeta-Jones and Aaron Eckhart. I haven’t seen the American version in at least three years, but a lot of scenes were very reminiscent of Mostly Martha. Now that I’ve seen the original, I’m curious to rewatch it.
Posted by C.G. at 1:38 AM No comments:

One of the students at work recommended this film, and it did not disappoint. It’s about a chocolate-maker and the owner of a chocolatier who both suffer from crippling shyness. Angélique is a gifted chocolatier, but she faints every time someone asks her a question about her creations, and she masquerades as a chocolate-making hermit to avoid such situations. She attends support-group meetings (which I think translated more to ‘emotional’ rather than ‘romantic’), and sings “I Have Confidence” from The Sound of Music to psych herself up and celebrate when she conquers her fears. Jean-René brings a briefcase full of extra shirts to dinners in case he needs to change them (which he does), and his therapist gives him homework along the lines of “shake hands with someone” and “invite someone to dinner.”

When Angélique goes to work for Jean-René as a saleswoman, a story that is both uncomfortable and cute unfolds. Though they’re well-suited, they can’t talk to one another long enough to figure it out. Even the almost-date they share is incredibly awkward and pretty disastrous, but it’s their push to save Jean-René’s family chocolatier that allows them to bring out the best in each other.

It’s a rom-com that doesn’t always follow typical conventions (or maybe it follows French film conventions) but makes good use of its quirkiness and sweetness. So while I appreciate Inch’Allah for its serious examination of one woman’s struggle to find a place within a very large world, Romantics Anonymous zooms in on two people who only needed to find each other, providing an entertaining evening in the process.
Posted by C.G. at 10:38 PM 2 comments:

My Summer of Foreign Film: Inch'Allah

I like watching movies. A lot. But to make myself feel less like a couch potato, I try to do something productive while watching them—knitting, exercising, writing letters. Because my attention isn’t always on the screen, I don’t watch foreign films as often as I’d like. However, I’m falling into a new habit. Half an hour before I want to go to sleep, I’ll climb into bed and watch part of a movie on my iPad. Maybe it’s because of this—watching with all the lights out, earbuds in, and just the glow of the small screen—that I enjoy foreign films as much as I do.

A few nights ago, I watched Inch’Allah from writer/director Anaïs Barbeau-Lavalette. It centers on Chloé, a Canadian doctor working in a clinic in Ramallah but living in Jerusalem. To get to work and back, she must pass a checkpoint, usually manned by her neighbor, Ava. And then there’s Rand, one of Chloé’s patients who is expecting a child while her husband sits in prison. The story is about these woman—one within the walls, one without, one who can go between—and the friendships they form in the midst of struggle.

It reminded me a bit of my time in the Peace Corps—preteen boys yelling at you while you walk down the street, hospitality that is simultaneously gracious and strained, the spark to act without anyone to tell you how. I say ‘a bit’ because hey, my situation wasn’t as volatile and medicine is considerably more important than TEFL teaching.

As we watch events unfold through Chloé’s eyes, her increasing sense of futility is evident and quite sad. She can do all she can to help—help Rand deliver a healthy baby, help Ava feel like a normal girl instead of a soldier* by going out to a dance club, help Rand’s family by taking them to their old home–but will it even make a dent? There are a lot of close-up shots that show the full brunt of Chloé’s reactions and emotions. But it’s not her story, exactly. It’s everyone’s, and I think that’s what makes it such a poignant film.

Watching Inch’Allah made me realize how much I miss conversing in other languages. My area offers little opportunity to use the Russian I learned in Kazakhstan, which means I’ve lost a lot of it (although a friend of a friend might be available to tutor me soon!). So, I’ve decided to broaden my horizons by making this My Summer of Foreign Film. I’m shooting for fifteen films over the course of the summer. Next up is Romantics Anonymous.

*Ava might not actually be a soldier. I’m a little fuzzy on that. I should reread my history textbooks from college!
Posted by C.G. at 10:28 PM No comments:

In the car: The Name of the Wind audiobook, by Patrick Rothfuss

I'm on CD 7 out of 23. Not sure if I like it yet, mostly because of the main character, but at least it will keep me busy for a good while. One of my friends at work insisted I read it, so I'm betting it gets better.

For fun: Lights Out, by Ingrid Michaelson
Favorite tracks: "Home" and "Time Machine" 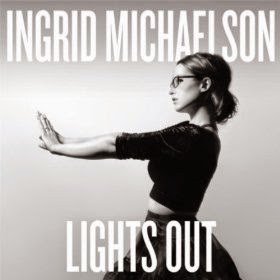 Ingrid Michaelson and Sara Bareilles are probably the only two constants in my music collection. As long as they keep alternating years for releasing albums, I'll be a happy listener. 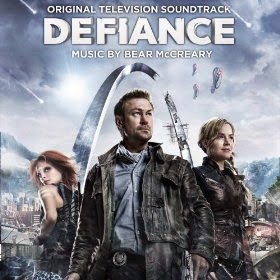 This soundtrack's a bit all over the place--futuristic rock music, sweeping score cues, '80s covers--but I love it.
Posted by C.G. at 2:19 PM No comments: