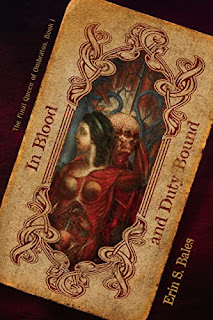 Erin Bales and I attended the same grad program, although we weren’t in the same cohort. However, Erin was in my very first workshop, where I got to read ten early pages of this manuscript. I don’t even remember what the pages were about, but I know I liked them a lot. What I do remember is telling her that I trusted her as a writer, and that still holds true. Throughout the read, I wasn’t always sure where plotlines were going, but I was happy to be along for the ride.

In Blood and Duty Bound features multiple points of view and storylines. Renn, one of the main characters, is the youngest princess in the Morovide royal family and the fourth in line for the throne of Ombratos behind her mother and her three older sisters. She’s overlooked by her mother, the queen, and in love with Dallan, who’s engaged to her oldest sister, Solena. We spend a bit of time seeing Renn’s typical life before the plot kicks in and she’s tested as a princess and as an individual.

Parneo, her twin, is gifted in alchemy, which is the world’s main magic system and based on blood. The Morovides are literally bound to the Ombratos throne via their blood. Healing charms and the like are activated with a drop of blood accompanied by an incantation. Like all the other male twins in his family line, Parneo, because of his talent with alchemy, is prone to the madness that tends to accompany it. This plays a minor part in the story with some major implications.

Getha, my favorite main character, is a royal guard training for the varo, the elite force who protect the members of the royal family. She’s a very straightforward person with tunnel vision toward her goal. It’s always interesting to me when characters like this are forced to pivot when something unexpected demands their attention. Since this is the first book in a series, I’m very much looking forward to how she develops as a character.

Helenia provides the third main point of view and easily the most morally questionable and interesting. While Renn and Getha are youngish and idealistic, Helenia has more experience with life, specifically its disappointments. Dallan’s aunt, she’s from the island nation of Tithen, which has a revolutionary history. Especially intriguing is her relationship with Mayve, her sister-in-law and former wife of the ruler of Tithen.

Which brings me to two of the things I find most effective and refreshing about In Blood and Duty Bound—its female characters and their relationships with each other and with other people. Until we get to a point in the fantasy genre where having a majority female cast is as normal as having a majority male cast, I think it’s worth drawing attention to that. Renn, Getha, and Helenia are all complex people with clear motives, strengths, and flaws, and their relationships shape who they are and affect their actions. The book is at its strongest when Getha and Renn are together. In the interest of not spoiling anything, all I’ll say is that I look forward to seeing where the story takes them.

Like many epic fantasies (including my own!), there’s some pretty intense world-building in the first hundred or so pages. Consequently, I found the book a little slow to start, but I find a lot of books slow to start, so take from that what you will! That said, the world-building pays off, and the intertwining of all the storylines near the end is satisfying.

Ultimately, this has a ton of what I like to see in the genre and some surprises to boot. I’d recommend this for any reader who likes fantasy, especially epic fantasy, and for readers who enjoy books with female main characters. This was one of my favorite reads of the year so far, and I’m very much looking forward to the second book in The Final Queen of Ombratos series.