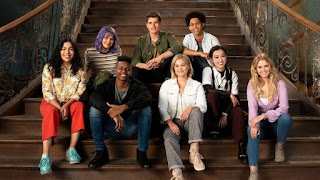 Runaways/Cloak and Dagger
I know what you're thinking. I'm cheating on the very first one! Yes, you're right. I try to keep these lists to five items, but these two shows are interconnected enough that hey, I do not feel bad about this decision! Runaways was one of my favorite shows last year, and I was eagerly anticipating this season, although I'm sad that it's the last. The show was really finding its groove, and there's so much potential for a few more seasons. But what I liked about this season was that the kids know who they are now. They know their powers, they know their strengths and weaknesses, and they know they have to stick together. And found family is one of my favorite tropes!

Like in Runaways, in Cloak and Dagger, my favorite aspect is the relationship between the main characters, Tandy and Tyrone. I thought that really grew in season 2, and I absolutely loved the cross-over episode between these shows. Tandy and Tyrone brought a different vibe to the Runaways group, and for such a heavy episode, it was also pretty funny. I'm sad both of these got canceled because they both deserved bigger audiences. 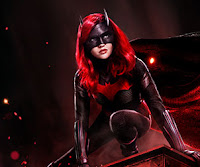 Batwoman
I didn't expect to like this as much as I do, but one of the reasons for that is the support cast. Camrus Johnson as Luke, Meagan Tandy as Sophie, and Nicole Kang as Mary are all great in different ways. The story focuses on a Gotham that hasn't seen Batman (or Bruce Wayne, but no one connects the two because comics!) for three years. Kate Kane rolls back into town and back into her complicated family when her ex-girlfriend is kidnapped by a villain named Alice. In her efforts to save Sophie, she accidentally gives Gotham hope that Batman has returned. Only he hasn't, so who is going to step up to walk in his shoes? Kate can only do it with Luke's help, and I'm looking forward to seeing whether she lets other people in on the secret during the second part of the season. For a show that's just getting started, I think this has a lot of potential. 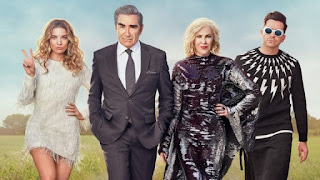 Schitt's Creek
Okay, I had to split up the superhero shows a bit. This was an unexpected find for me. I have a few friends who were raving about it, so I finally decided to check it out. I'm really glad I did even if it took me until about season 2 to really get a feel for the show and the characters. It follows the Rose family, who lose everything and are forced to move to a town they bought as a joke years ago--Schitt's Creek. They end up living in the motel, where they befriend the proprietor, Stevie, who is probably my favorite character. The Roses have a hard time adjusting to their new lifestyle, but eventually they learn to appreciate the town and its interesting characters. The townspeople learn to appreciate the Roses' eccentricities, too, like Moira's wig collection, every item of which she has named. There are five seasons of 13 episodes available on Netflix (and a sixth currently airing on Pop TV), and the episodes are short enough that I can fit one in when I just need a little break to laugh. 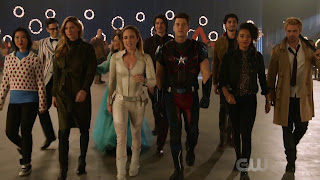 Legends of Tomorrow
The only one of my hold-overs from last year, and no one is surprised because it's one of my favorite shows ever. First of all, time travel! Second of all, as already discussed, I love the found family trope, and this show really leans into that. Sometimes that means characters I love decide their path lies elsewhere and they leave. And a lot of times, that means new characters I will come to love jump onto the ship. Although I didn't like season 4 as much as I liked season 3, this remains one of my favorite shows, and I'm looking forward to season 5 starting later this month.

Gentleman Jack
A friend and I watched the first episode together, and then I liked it enough that I watched the rest without her! Suranne Jones plays the main character, Anne Lister, a real historical figure who lived in Halifax, England, in the 1800s. And she's a marvel in the role. Anne is a force to be reckoned with, refusing to live within society's rules by loving who she loves and taking care of her own property and controlling her estate's coal business. Sophie Rundle plays Ann Walker, who is the polar opposite of Anne Lister--shy, not confident, and thought of as unable to make her own decisions. As they fall in love, they also grow as people. And let me be clear--this period drama is lush. Intricate costumes, gorgeous landscapes, soaring music. This is simply a wonderful show all-around.