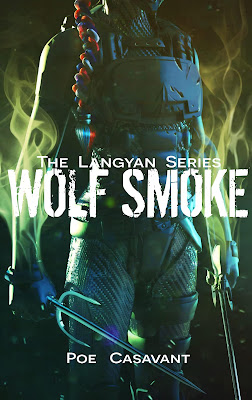 Now available in paperback and e-book from Sky Forest Press
Available on Amazon, Barnes & Noble, and wherever books are sold, or ask your library to purchase a copy

Add it on Goodreads today, and check under the cut for an excerpt


Sarah tore open the envelope and removed the paperwork tucked inside. “‘Welcome!’” she read. “‘And congratulations on being chosen to represent your nation in the inaugural Langyan Series. All one-hundred-eighty-one nations of the world will be participating, each with twelve team members. For the yearlong duration of the event, no replacement team members will be allowed. If a participant is injured, their team will continue with fewer members. Matches will be scheduled one week in advance. They will be one-on-one games of Capture the Flag. The prizes for winning matches are...’”
Sarah stopped dead, scanning the words below.

“Well?” asked Danny.
“Holy shit,” Sarah whispered. “‘The prizes are one million dollars per team member per match, two million for the team captain. Prize money can be sent to whomever the team member chooses. The winning team will also receive a one-thousand-dollar stipend bonus for food and supplies. Every team receives a weekly five-hundred-dollar stipend regardless of performance.’”

Eyes shining, she looked up at her team, most of whom were gazing back open-mouthed. Even Annie’s face had lit up at the mention of prize money.

“We’re going to be rich!” cried a lanky soldier sitting beside Keyes.

Sarah struggled to remember his name. It had been something French. She could picture his paperwork, the photo with the crooked grin, the notes on his affable personality…

Some leader you are, a Voice groaned. You had four days to learn a few names, and you couldn’t even handle that.

Sarah gave her head a little shake, as if to clear it from intruders. “‘Every team captain has been given a tablet for video chat,’” she continued. “‘Once a week, submit your supply orders. Non-anonymous teams can also send messages to their home countries.’” At this, she paused. “We’re an anonymous team. I figured we would have enough to deal with just trying to win matches. The last thing we need to be worried about is our public personas.” Glancing at Danny, she could see the understanding in his eyes. He knew the full extent of her anxiety and how crippling it would be to fail with cameras rolling.

“Have you seen your uniform yet?” Marty asked. “We each have one in our closet. Fitted, black, very fetching.”

“And slimming,” the lanky soldier commented.

Keyes turned and glared at him.

“What?” the soldier asked, surprised. “I didn’t mean specifically for you!”

Lareaux, that was his name. Sarah tried to burn lanky Lareaux, lanky Lareaux into her brain. Sitting beside Keyes, who was a good foot shorter, the two looked like a comedy duo. She held up a hand to silence them.

“‘Once a month,’” Sarah continued reading, “‘twelve captains will be selected at random to compete in individual challenges. These are mandatory and the winners will receive large bonuses, including the option of sending players home. If a captain is incapacitated, they will be replaced by their second-in-command.’” Her eyes met Danny’s, and she grinned. “Not a chance, buddy.”

The thought of competing alone was a comforting one to Sarah. Though she had doubts about her ability to lead a team, the Voices and their tongue lashings were motivation enough for herself. She craved the chance to finally prove them wrong.

“‘Lastly, teams will be given two hours to explore the arena. Team USA will be allowed out of their dormitory on Thursday, July 2 at 12:00 PM. The square arena measures two miles across, and the center is marked by a vertical steel pipe. A high-velocity wind tunnel can transport players around the arena quickly and easily. For your safety, please use the wind tunnel’s appropriate entry and exit ports. Excluding match times, after this exploration period, only team captains will be allowed into the arena.’”

At this, a chorus of groans echoed throughout the room.

“So we’re stuck in here while you get to explore?” Samson asked as he sunk dejectedly into the couch cushions.

“Looks that way,” Sarah said, refusing to meet his gaze. With no more pages left to read, her nerves were returning. She suddenly felt awkward standing before a room of strangers. She cleared her throat and asked, “Anyone know what day it is?”

“June 29th,” Keyes said, and pointed at the digital clock mounted on the wall behind her. “Three days until we get to see what we’re up against.”

Sarah nodded, determined to prove to her team that she could effectively lead them and, perhaps more importantly, prove it to herself. “Let’s not waste them.”