Welcome to a new semi-regular series, which is basically an excuse to talk about my favorite fantasy things and hopefully invite my friends to do so, too! I feel like I've been griping and grousing a lot about being disappointed in pop culture, so I want to be positive and draw attention to a genre I love. 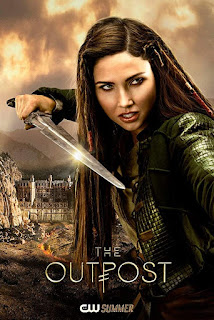 First up is a new TV show airing on the CW this summer called The Outpost. I've been excited about this for a little while because it's produced by Arrowstorm Entertainment, independent filmmakers who focus on science fiction and fantasy stories. I've been a fan for a few years now, ever since I randomly picked up a movie called Mythica: A Quest for Heroes on a whim one day. And since there aren't a ton of high fantasy films being made, I keep up with what they produce.

The Outpost follows Talon (Jessica Green), who's the last remaining blackblood after her village is slaughtered when she's a child. A decade or so later, her search for the men who killed her family takes her to the outpost, where she becomes a barmaid, though the job is second priority to her quest for revenge. Along the way, aside from the baddies she's after, she meets potential friends Janzo (Anand Desai-Barochia), Captain Garrett Spears (Jake Stormoen), and Gwynn (Imogen Waterhouse).

Things get complicated when Talon meets a man she knows only as the Smith, who tries to convince her she has a special power to summon demons. Elsewhere in the outpost, a tavern mistress battles for control of a drug trade, a disease finds its way into the walls, and rebellion against the Prime Order foments. And, like in all good dramas, everyone's got secrets.


Talon's firmly in the category of "strong female character." She's gruff and violent, and it takes a while to warm up to her. While she could be a bit nicer, a bit more endearing, it's interesting to watch where her journey takes her. I actually find Gwynn, the privileged daughter of a general, more intriguing, and I like that her relationship with Talon is complex. Janzo, who's both intelligent and kind, is my favorite character so far.

While I do think there's a lot of potential in moving away from European-medieval-inspired (and falsely white-centric) fantasy--or expanding the sandbox--I'm always down for some good sword-swinging and dark magic and lush scores. I'm reserving full judgment until the rest of the season airs because I want to see which direction the story goes in, but so far, I'm having a lot of fun and look forward to each episode. Overall, I recommend it to fantasy fans and welcome discussion about it!