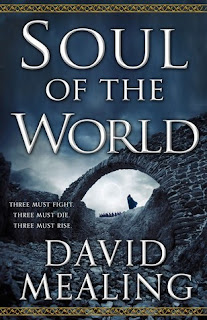 I'm writing this review because I loved this book and great books deserved to be talked about! It's no secret I love epic fantasy. I enjoy a ton of genres, but there's no shaking epic fantasy from the #1 spot. However, it's a very frustrating genre because it's been so focused on straight white male protagonists. To me, and to many other readers, that's tired and boring by now. I don't need the genre to be reinvented. I just need it to be more inclusive, and I'm very happy with this one.

I picked up Soul of the World on a whim. I knew I wanted a big, thick fantasy, but honestly, I often shy away from male authors. That's the majority of the genre, though, so I grabbed this one in B&N one day and decided to buy it because I was excited by the prospect of two of the three main characters being women (and the other being a man of color, but I didn't realize that just from reading the back cover).

Basically, the story takes place in a new world across an ocean from the old, so very much inspired by Europeans coming to North America. In this new world, there are indigenous tribes, colonies of Sarresant and Gand, and a wall that divides the two. The plot isn't easy to distill into a sentence or two because there's just so much going on. There's very cool magic and revolution and a shifting of gender roles and giant animals and gods with mysterious motivations.


There's so much in this book to love. I knew within a few pages that I'd enjoy this book, but it wasn't until I was about 200 pages in that I realized I couldn't put it down. No, not everyone's going to be down with the pacing, which is deliberate. This is epic fantasy, though. When is pacing not deliberate? Mealing's working with three main characters in three different locations with three different story-lines. Just like it takes time to get one ball rolling, it takes even longer to get three going.

The main characters as previewed on the back-cover synopsis:

Sarine is an artist on the streets of New Sarresant whose secret familiar helps her uncover bloodlust and madness where she expected only revolutionary fervor.

Arak'Jur wields the power of beasts to keep his people safe, but his strength cannot protect them from war amongst themselves.

Erris is a brilliant cavalry officer trying to defend New Sarresant from an enemy general armed with magic she barely understands.

I liked Sarine right away because she's an underdog. She makes a living by selling her drawings of the city and its noble inhabitants, and she lives in a church with a priest she calls Uncle. She also has to hide her magic, which she often uses to sneak into places in order to sketch nobles, because anyone with magic has to either serve in the army or buy their freedom.

She also has a dragon-like companion named Zi, who's mysterious and doesn't like to give straight answers. That's one of the four magic systems, all of which are incredible and a lot of fun, present in the book.

Arak'Jur is a member of the Sinari, one of the indigenous tribes. He bears the "Arak" in his name because he's a guardian of his people, which means when he kills an animal, he can ask to be granted a gift from that animal. It's a little hard to explain, but he can call upon these gifts, such as speed, in battle. In addition to guardians, men from the tribes communicate with the spirits in order to see the future. Those together are the second of the magic systems.

It took me a little while to warm up to Arak'Jur, but that might have been because his is the only non-colonial perspective. Consequently, I spent a lot of time at the beginning of his story trying to gauge how it would dovetail with the others. The tribes have different roles for men and women. Even their magic is considered to be separate, and here's where the third form of magic comes in (I'm counting the men and women's magic as two separate systems). One of the aspects of this story-line that I really enjoyed was how Mealing explored gender role within the tribes through Arak'Jur's eyes. Arak'Jur is also the only perspective from a person of color, as far as I can tell. I can't decide for anyone else whether it's good representation, but I think it's great that, in the white-male-protagonist-dominated world of epic fantasy, Mealing chose two women and a man of color for his main characters.

And, oh, my goodness. Erris. I can't even explain how much I liked Erris. She's a badass rising through the ranks of the army and doing everything she can to defend New Sarresant against Gand by wielding the fourth and final magic system, which involves being able to see different forces resting along leylines and "tether" them to oneself or someone else. The main forces are Life, Death, Body, and Shelter, and exploring the new continent exposes them to more. It's very cool. Also, Erris's motto is "only excellence, nothing more," and she even relies on it when she disagrees with a command straight from the Crown Prince. That's just awesome. I love all three mains, but I'm really looking forward to seeing more from Erris in book two.

There's a lot I can't say without giving things away. I just want a lot of people to read this and love it and talk to me about it, okay? Thank you. But seriously, I'd recommend this to any reader who loves epic fantasy and is patient enough to settle in for a long, intense journey.
Posted by C.G. at 4:12 PM