The Road to Book Two--Part 2

I'm back with an update on Book Two, tentatively titled The Shadow of the Endless Night! If you follow me on Instagram, you might have seen that I posted a picture of the complete first draft. Here it is in all its glory, which isn't very much, to be honest! Right now, it stands at about 96,000 words, which is on par with what the first draft of Book One looked like. For reference, the final version of Book One is around 129,000 words. 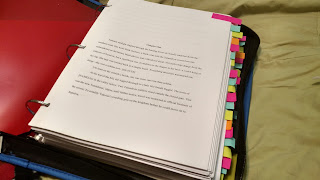 The different color tabs denote different points of view. I've previously said that, unlike Book One, Book Two will have three points of view. Besides Aurelia, the other two main POVs belong to Edana and Mira. Mira is one of my favorite characters in this universe, so it was a joy (and a challenge) to write from her perspective. Edana was, by far, the hardest point of view to write. That's partly because of her storyline, which is the most political in nature, and partly because she has a lot of similarities to Aurelia. I love both Mira and Edana in different ways, and I hope you'll love being in their heads, too.

What's Next
As you can see, I've printed out the entire draft. When I'm revising, I like to work on paper. Although I wrote the POVs separately--Aurelia's first, then Mira's, and finally Edana's--here, they're already intermingled. Putting them in order will help me get a better sense of how they connect. My new goal is to revise it enough for it to be readable by Christmas or New Year's, at which point, I'll send it to some beta readers. The number of drafts after that will depend on their critiques.To completely revise this draft by the holidays, I'm bowing out of NaNoWriMo, but that's okay. It helped me finish this draft, and I can come back to the sci-fi manuscript I was working on for Nano whenever I need some space from Book Two.

Watch this space for more updates!
Posted by C.G. at 5:49 PM

Email ThisBlogThis!Share to TwitterShare to FacebookShare to Pinterest
Labels: epic fantasy, fantasy series, fantasy writing, sequels, the dying of the golden day, the heartfriends, the road to book two, the shadow of the endless night, writing