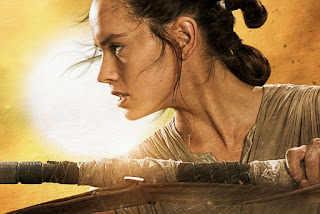 Rey is unusual for a movie heroine, but especially for one in a blockbuster, in arguably the biggest franchise of all time. She's strong, able to look after herself after living alone as a scavenger for the majority of her life. When she gets attacked in Niima outpost, she fights off her attackers with her trusty quarterstaff. But being able to take care of herself doesn't mean she has to be unemotional. She's clearly taken aback when Finn asks, multiple times, if she's all right, and she wears her emotions on her sleeve when she sees a green planet for the first time and when she says goodbye to Finn. Making Rey the central character in The Force Awakens allows her to be more than the token female character. It allows her to be complex and to inspire a generation of girls who no longer have to grow up thinking that girls can't be Jedis. There's so much I can say about Rey, but I'll stick with: I'm excited to see where her journey takes her.
Posted by C.G. at 7:04 PM