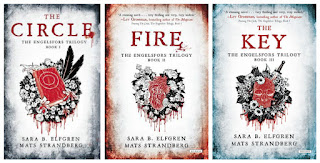 The heart of this story is the girls: Minoo, Anna-Karin, Linnea, Vanessa, Rebekah, and Ida. All six girls are fully realized characters with their own hopes, fears, flaws, and strengths. Although they don't start out as friends, their relationships--both with the group as a whole and with other individuals--develop in realistic and moving ways. I want to re-read these already, and I've spent the last few months talking them up as much as possible!
Posted by C.G. at 11:28 AM