I like winter for many reasons: snow (when I don't have to drive in it), time off to spend with family, those pine cones that smell like cinnamon, cozy blankets and sweaters, tea and cookies, beautiful decorations. I could go on and on. But one thing I especially love about winter is that I associate it with fantasy stories, whether epic or simply high or other-world fantasy. I'm not really sure why. I think it's because fantasy is my favorite genre and therefore it feels cozy to me, and winter is the season for coziness.

In that vein, here are some suggestions for epic fantasy movies and TV shows to watch this winter.

The Letter for the King
This TV show is from 2020 and is on Netflix. My friend Meredith recommended it to me ages ago, but I only just got to it and finished it. I'm glad I did! The series follows Tiuri, a teenage squire who's trying to follow in his adoptive father's footsteps. On the night he and his fellow squires are going through the trial to become knights, he breaks the silence by answering a knock at the chapel door. Answering the door leads him to a dying knight, who gives him a letter for the king across the mountains. By accepting the letter, he begins a journey that will have change both his world and himself.

Amir Wilson, who plays Tiuri, is absolutely endearing, and I loved watching his character grow. Thaddea Graham, Islam Bouakkaz, Jonah Lees, Jack Barton, and Nathanael Saleh play his fellow squires. All of them are interesting and have satisfying character arcs (although I disagreed with how one of their stories ended). Ruby Ashbourne Serkis has a standout role as Lavinia, a brash and hotheaded girl who joins Tiuri's quest mostly to run away. Their different personalities play off each other really well.

There's lots to love here! The story feels very Arthurian inspired, and it's set in a world where chivalry matters. In epic fantasy fashion, there are multiple kingdoms, a war going on, and political aspects at play, which is why delivering the letter to the king is so vital. Each episode introduces new things about the world, which ultimately feels familiar in a comforting way.

I will say that I didn't find myself fully invested until the third episode, and it's only six episodes total. Once I was invested, though, I was really invested and finished the show in a couple days. Unfortunately, it's been two years since Netflix released this, and since Netflix likes to cancel things or let them languish instead of investing in them, it seems like this won't get a second season. However! It's based on a book series by Tonke Dragt, and I absolutely plan to check it out.

The Mythica Series
The Mythica film series has long been a favorite of mine. There are five films total, with a six being planned (and available to back on Kickstarter). The first movie, Mythica: A Quest for Heroes, follows Marek (Melanie Stone), who longs for adventure. She ends up volunteering to find a priestess's kidnapped sister and assembles a ragtag team to get the job done.

I like this series because each movie is fairly straightforward, but it all adds up to some big developments and big consequences in a classic struggle of good vs evil. I started rewatching the series a month or so ago, and I should get around to finishing it! You can find these on multiple streaming platforms, including FreeVee, which is, as it sounds, free. And free is a very good price!

A small heads-up that Kevin Sorbo is in these movies. Only for a couple scenes, but I wanted to mention it since he spreads so much disinformation and unkindness online.

On a light note, I'll take this time to shout-out The Crown and the Dragon as another great Arrowstorm film. That one's a standalone if you prefer shorter viewing experiences. In a land overtaken by an empire, a young noblewoman named Ellen must fulfill her aunt's quest to deliver a relic to the land's rightful ruler (sound familiar?). 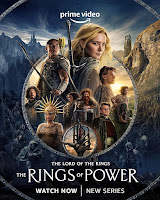 Rings of Power
Oh, what to say about Rings of Power? Everyone already knows about it, so I feel like I don't have to say much! So, I'll just go over the things I loved, which won't be the things everyone loved.

First, it's gorgeous to look at! Excellent on a giant TV. Beauuuutifully shot, if I may say so. Legit everything about this is gorgeous--the landscapes, the costumes, the people. Galadriel (Morfydd Clark) is obviously a favorite of mine. It's so interesting to see her as an angry warrior, which we know she grows out of. I'm looking forward to that character growth. She also gets some incredible fight scenes, including one in episode 4 (I think) against multiple members of the Sea Guard at once.

Nori (Markella Kavenagh), Poppy (Megan Richards), and the rest of the Harfoots have a lovely and poignant storyline that deals with a Stranger falling from the sky and testing their bonds as a clan. Arondir (Ismael Cruz Cordova) is an elf living among humans, who are looked down on by elves. But he has a very sweet story with Bronwyn (Nazanin Boniadi) and her teenage son, Theo (Tyroe Muhafidin). Episode 6 is a particular triumph, with the various storylines coming together nicely.

One thing I adore about Tolkein's world is that it's very noble. If you know me in real life, you probably know that I don't care much for the Game of Thrones world because it's so dark (although the books are arguably better than the shows). Martin's world is an obvious pendulum swing away from Tolkein's, but fantasy has been so inundated with grimness and darkness over the past decade or so that I'm enjoying the swing back. I love flawed characters who are trying to do good, even if they don't succeed. I'm very much looking forward to season 2!

Willow (2022)
I have vague recollections of watching the original Willow movie when I was a kid, but I don't remember much about it. Last weekend at my parents', I was scrolling through Disney+ and saw that they'd made a sequel series. I popped it on since I love watching epic fantasy specifically on my parents' giant TV, haha, and was very pleasantly surprised!

This feels like a chaotic D&D campaign where the majority of the characters share one brain cell. The show picks up about 20 years after the movie. Sorcha (Joanne Whalley) rules Tir Asleen as they wait for Elora Danan, who has been secreted away until she's grown, to return and claim the throne. She married Madmartigan (Val Kilmer), who went away on a quest and never came back, and they have teenage twins. Kit (Ruby Cruz) is arrogant, fancies herself a warrior, and actively fights against her mom's plans to marry her off to the heir of a neighboring kingdom. Airk (Dempsey Bryk) is a himbo who's more interested in chasing kitchen maids than he is in political affairs.

Their lives get turned upside-down when Airk is kidnapped by the Gales. Kit volunteers to go after him. She's joined by her best friend and love interest, knight-in-training Jade (Erin Kellyman); her betrothed, Prince Graydon of Galladoorn (Tony Revolori); and Thraxus Boorman (Amar Chadha-Patel), an imprisoned treasure hunter who agrees to go on the quest in exchange for his freedom.

They're soon joined by Dove (Ellie Bamber), a kitchen maid in love with Airk, and they begin their adventure by searching for the famed Nelwyn sorcerer Willow (Warwick Davis).

Like all fantastical quests, it's not without its dangers. Enemies are encountered, plans go wrong, and allies fall. It tests all the adventurers in different ways. There's action, humor, and, of course, magic. As of this writing, four episodes (out of eight) have been released. Each one adds to the world and to the lore. We're finding out some answers and asking more questions. The characters are growing stronger (narratively), and I'm enjoying watching them bicker and bond. I can't wait for the second half of the season.

Wheel of Time
I have an uneven history with Wheel of Time. One of my good friends absolutely loves the book series, which is 14 books long. I listened to the first book way back in 2012 but didn't love it enough to keep going. Then when I heard a show was coming out, I listened to the second book and felt about the same. Then I watched the show and fell in love with it.

The show follows the Aes Sedai (which basically means a woman who can use magic) Moiraine (Rosamund Pike) and her Warder and best friend, Lan (Daniel Henney) as they search for the prophesied Dragon Reborn. Their search leads them to the Two Rivers, where they find five young men and women who might be the chosen one. They include Rand (Josha Stradowski), Mat (Barney Harris), Perrin (Marcus Rutherford), Egwene (Madeleine Madden), and sort of accidentally, Nynaeve (Zoë Robins). After their village is attacked, they reluctantly join Moiraine's quest.

The world is pretty interesting. Only women can use magic, and men who have the ability to "channel" it eventually go mad, which introduces complications if it turns out that one of the boys is the Dragon Reborn. As typical with me and fantasy shows, I think the scenery, sets, and costumes are all lovely. I love shows that are pretty to look at! There are some really great side characters and some interesting threads being woven into the story as a whole. At only eight episodes, they jam a lot into the first season (arguably too much, but it's an improvement over the slow pace of the books), and it all got me excited for season 2! Fingers crossed it'll be here soon.

Aaaand I went on for much longer than I thought, so I'll stop there. Hope you get some enjoyment out of these suggestions. Stay tuned for Part 2: Epic Fantasy for Winter Reading!