Although I'm more of an autumn person, there are a ton of things I love about summer--sunshine, storms, ice-cold lemonade, fireflies, reading in a hammock. Plus all the science-fiction television shows that come around. I read a lot of fantasy, but I tend to watch more sci-fi. Maybe it’s because sci-fi shows are easier to find. Maybe I haven't been reading the right sci-fi. Whatever the reason, one of my favorite things about speculative fiction in general and science fiction in particular is that a lot of it remains grounded in humanity. Even though the settings and plots are outlandish, the characters and relationships are ones we recognize and connect with. This summer, my favorite new spec-fic shows were Fox's Wayward Pines and AMC's Humans. In honor of the summer sci-fi tradition, here are some of my all-time favorites. 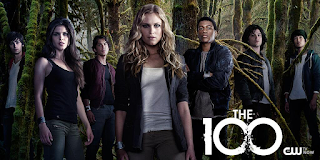 The 100
This is a gem of a show. I discovered season one on Netflix halfway through the airing of season two and scrambled to catch up. It starts a bit slowly, but once it gets rolling, boy, does it get rolling! 97 years after a worldwide nuclear war, the last of the human race survives on a giant space station called the Ark. Air is running out faster than they thought, and they send 100 underage delinquents down to Earth to see if it's habitable. The kids face threats from each other, nature, and Grounders, the humans who managed to survive on the surface for nearly a century.Along the way, the show asks big questions, like what it means to be human and whether they can hold onto their humanity while fighting for their survival.

That girl in the middle up above is Clarke Griffin. Even though this is an ensemble show, she's the main protagonist, and she's awesome. She's smart, bossy, courageous, and an all-around badass. Her season two arc, in which she takes on the burden of protecting her people and fully realizes the consequences of it, is exceptionally complex and heartbreaking. The rest of the main crew--Octavia, Raven, Bellamy, Lincoln, Lexa, and more--is just as compelling. In a show with no black-and-white morals and no true "heroes," it's easy to root for nearly everyone (with the exception of the Wallaces, of course).

Orphan Black
Orphan Black's opening scene is one of my favorites of any TV show. Sarah Manning gets off a subway at night, makes a phone that does not go well, and then hangs up and sees a woman taking her shoes off and setting down her purse. The woman turns and looks exactly like Sarah. Then she jumps onto the track. Talk about a hook!

The first two episodes are chock-full of suspense as quick-thinking small-time grifter Sarah snags the woman's purse and takes over her identity. Until she finds out that, rather than having a long-lost twin sister, she's in fact part of an illegal cloning experiment. Then the story gets kicked into high gear, and we're introduced to Alison, Cosima, Rachel, Helena, and others, all played by the superb Tatiana Maslany. It's about women joining together to take ownership of their bodies and lives, and it's great to see a show with an ensemble cast that's mostly women (even if it's all the same woman), all distinctive and interesting in their own right. Solid all around, the show's at its best when it gives in to dark comedy. 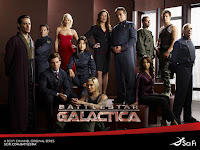 Battlestar Galactica
I've told this story a bunch, but I'm going to tell it again. I took a class in undergrad on Renaissance drama at the same time the last season of this show was airing. Every Monday before class, my teacher, a classmate, and I would discuss Friday's episode. And then she'd find away to talk about it in class and relate it to the Renaissance plays we were reading. The lesson I walked away from that class with was: stories last because, despite their period trappings, they're about human beings. The space trappings are wonderfully designed, and the characters will all have you rooting for them in different ways, but BSG's greatest strength, like The 100's, is in raising the question of what it means to be human.

Fringe
This is such a wacky and engaging show. It centers on Olivia Dunham, an FBI agent who is drawn into the Fringe Science division following a biological incident on an airplane. She enlists the help of Dr. Walter Bishop but needs his son, Peter, to act as a handler of sorts as they solve cases. The mythology deepens and the story arcs become longer as the seasons go on, culminating in a shorter fifth and final one that revolves around the Bishop/Dunham family and their fight for their future. Throughout the many imaginative developments, such as parallel universes and alternate timelines, the relationship between Olivia and Peter anchors the story.

Chuck
Definitely the most lighthearted show on this list, Chuck is about a regular guy who works as a Nerd Herder computer repair guy at Buy More until his ex-best friend sends him an email that downloads a government super computer into his brain. Enter NSA agent John Casey and CIA agent Sarah Walker, sent to protect him until they can get the secrets out. It's an outlandish premise but one that works because of the strength of the characters. Chuck and Sarah's will-they-won't-they relationship is the heart of the show, and Chuck's lovable family--sister Ellie, brother-in-law Devon, and best friend Morgan (who takes a little while to grow on you)--round out an endearing cast.